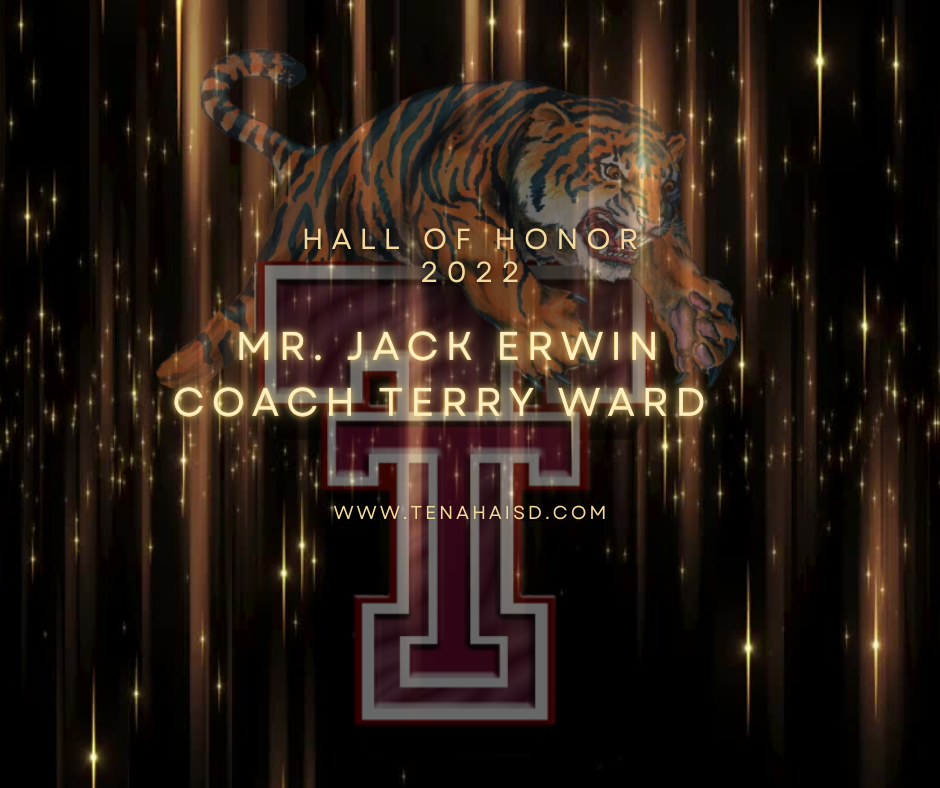 Meet our Hall of Honor Inductees for 2022

Tenaha Independent School District is pleased to introduce our 2022 Hall of Honor Inductees.

Jack Velton Erwin, born in Tenaha, TX on June 12, 1943, attended and graduated from Tenaha Schools in 1961. While in high school, he participated in sports and was named "Most Athletic" his senior year.

He married Alma Fay Simmons of Marshall, TX and they had two sons, Jack Carter and James Brad. In 1971, the family moved to New Iberia, Louisiana where in a short period of time he was promoted to Warehouse Manager for Cameron Iron Works. After several years, Jack was transferred to Patterson, LA where he became Cameron's youngest Plant Manager at age 33.

In 1988, Cameron Iron Works moved Jack to Liberty, TX to oversee the building and management of a new Cameron Iron Works plant. He was later promoted to Manager of the Western Hemisphere and eventually became Cameron's Global After Market manager. This position allowed him to travel to 6 of the 7 continents for work. Jack retired from Cameron in 2001.

After retirement, Jack started his own consulting business which he did for many years. Among his many interests were coaching Little League Baseball and Cameron's Men's Softball teams. In 2011, Jack was inducted into the Louisiana Softball Hall of Fame for his coaching accomplishments. He also enjoyed fishing and especially his involvement with the Tenaha High School Fishing team composed of Matthew Flournoy and Colton Hutto.

One of Jack's favorite past times was traveling with his wife, Alma, and their small dogs in their motorhome. Their many adventures took them to 48 states and Canada.

Terry Ward is entering his 26th year in education and his 13th year as a head football coach and athletic director with a career record of 95 wins. After graduating from a small East Texas high school, Coach Ward earned his Bachelors of Science in Kinesiology and his Master in Educational Leadership at Stephen F. Austin. He coached in eight schools in the East Texas area, and as AD has had eight team sports play for state championships (boys and girls), along with numerous individual athletes who competed at the state level. At Marshall High School, he coached running backs in the 2005 5A state championship against Highland Park, but his career highlight will always be leading the Tenaha Tigers to the 2011 22A state championship at Dallas Cowboy Stadium, with a return trip the following year.

Coach Ward has been honored with awards from SFASU and the Texas High School Coaching Association and was the first recipient of the Don and Debbie Fallin Legacy Award in 2013. Most schools are fortunate to have a great coach/athletic director once in his career, but Tenaha has had the privilege of Terry Ward being part of the Tiger Nation twice, as he returned to the Pit this year after eight years away. Any former athlete who has been coached by Coach Ward can tell of the difference he has made in the lives of so many.

Coach Ward, his wife Elizabeth, and sons Andy, Cooper, and Luke are excited to be back home where they have always been part of the family. He hopes to finish he career as a Tiger and continue the winning tradition what has always made TISD excellent.

Congratulations to both of these deserving individuals and their families. A reception honoring our Class of 2022 inductees will be held Saturday, October 15th along with Tenaha ISD Homecoming Memorabilia being on display in Main Street of the High School as well.